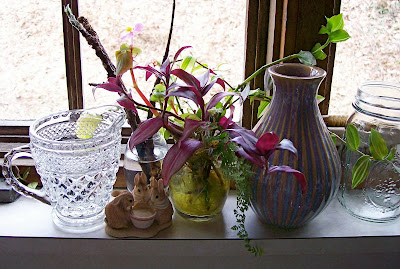 Has it really been 4 days since my last post? Where does the time go?
I don't feel like I've been away, though. I have been working right here, in this spot, with this silly background. (My apologies to those of you who were assaulted with the khaki background. That was just wrong!) Don't get settled in yet. I'm still working on everything. Although, if I'm a good girl and do what I really should be doing, you won't see much more change until after the 20th - T day!
Other than bloggy background woes, I've been trying to move along with preparations for the tea but feel stuck in the mundane. Usually, that wouldn't be the absolutely worst thing in the world but I feel an urgent need to feel urgently about getting my house put together.
The picture up above  is of the window sill over my kitchen sink. It's washed and decluttered BUT, just inches below, is a horrific messy pile of dishes. It brings new meaning to the saying, "look up"! Just a foot to the left is a dish drainer full of pretty, pretty china cups and tea pots waiting to be put back into the kitchen dresser - hence, the sink full of dishes, pots and pans. It's hard to move around though, because the rabbit cage is in the middle of the kitchen (awfully close to that sink). We can't put the rabbit cage back into the corner under the window until we put up the new curtain rod. It's hard to maneuver at the moment - especially around the step ladder that's partially blocking the door.
Those of you who know me haven't even batted an eyelash at this news of chaos.
It's quite normal for me.
HOWEVER,
The kitchen is painted!
and,
oh,
it's sooooo pretty!
The reason that I'm sharing all of this with you is, well, because I promised to keep you posted with how things were going. Also, to just let you know where I've disappeared to.
And then, because, as I was scrounging around for food to feed my 3 kangaroos for breakfast (did I mention that I desperately need to go shopping?),
I looked up and saw "3 leetle rabbits" (as Mr. Mcgregor would say) eating porridge and I was inspired and encouraged. 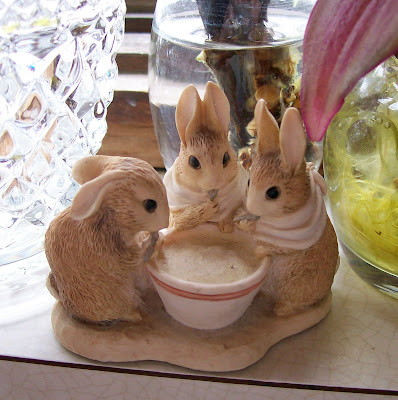 I'm often drowning in lovely projects
and,
I always say,
"if I'm going to die of stress, what a way to go!"
Well, I'm not dying and I'm not stressed
BUT,
i do have to go!
Kapwing!
Love, Kate
Labels: Beatrix Potter, thoughts on life Posted by Katy Noelle at 11:05 AM