I can't get cucumber sandwiches out of my mind! 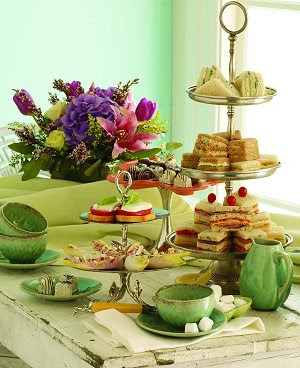 I don't have the time or enough light to take pictures of some of the things that I'm dying to share with you. Pretty china is out of the cupboards in a glorious jumble, the kitchen spruce up is coming together beautifully (especially considering that it's not an official makeover), silver tea pots are being polished and I have pictures of "Ladies' Teas" of the past.
There's time ...
... and, in the meantime, I went on a huge grocery shopping trip yesterday and observed that ...

Mud Season is definitely here!
I was swishing all over the road like a fish! 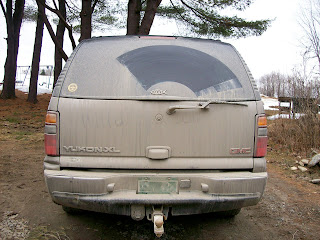 This is a wonderful thing!

This, along with the wonderful March winds whipping down our hill, the snow melting and the promise of rain mean that we can pretty assuredly say that spring is here early this year! 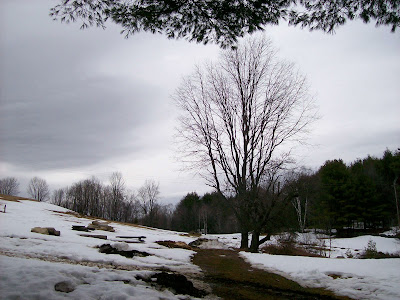 And, I shouldn't forget to mention that the sap is running! 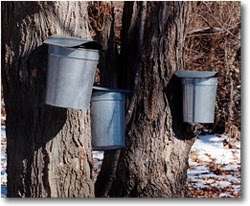 (Okay, this isn't my image. It's too cold and that wind goes right through a person! I'll take some of my own pictures later.)
Well, speaking of cucumber sandwiches. As I was going off to market yesterday, I was thinking of my favorite scene from my favorite play, The Importance of Being Earnest! Indeed, I have been thinking of it ALL week. The part that I've been dwelling on is the one in the first act (obviously). It's the bit with the cucumber sandwiches and the bread and butter for Gwendolen. If you know the play at all, you've probably nodded and chuckled. If you don't, or, if you need a refresher, (or, if you just love the thing,) I have very kindly included an edited excerpt here for your edification.
(I just clocked it. It takes four minutes for me to slowly read.)
If you don't want or need to read it (probably because you know the whole thing from memory), or, you just want the gist of it - you can skim through the highlighted parts. If you just want to skip to the end - I'll meet you there.
Act I scene I
Scene Morning-room in Algernon’s flat in Half-Moon Street. The room is luxuriously and artistically furnished. The sound of a piano is heard in the adjoining room.


[Lane is arranging afternoon tea on the table, and after the music has ceased, Algernon enters.]
Algernon. Did you hear what I was playing, Lane?
Lane. I didn’t think it polite to listen, sir.
Algernon. I’m sorry for that, for your sake. I don’t play accurately—any one can play accurately—but I play with wonderful expression. As far as the piano is concerned, sentiment is my forte. I keep science for Life.
Lane. Yes, sir.
Algernon. And, speaking of the science of Life, have you got the cucumber sandwiches cut for Lady Bracknell?
Lane. Yes, sir. [Hands them on a salver.]
Algernon. [Inspects them, takes two, and sits down on the sofa.]
Lane. Mr. Earnest Worthing.

Algernon. How are you, my dear Ernest? What brings you up to town?
Jack. Oh, pleasure, pleasure! What else should bring one anywhere? Eating as usual, I see, Algy!
Algernon. [Stiffly.] I believe it is customary in good society to take some slight refreshment at five o’clock. Where have you been since last Thursday?
Jack. [Sitting down on the sofa.] In the country.
Algernon. What on earth do you do there?
Jack. [Pulling off his gloves.] When one is in town one amuses oneself. When one is in the country one amuses other people. It is excessively boring.
Algernon. And who are the people you amuse?
Jack. [Airily.] Oh, neighbours, neighbours.
Algernon. Got nice neighbours in your part of Shropshire?
Jack. Perfectly horrid! Never speak to one of them.
Algernon. How immensely you must amuse them! [Goes over and takes sandwich.] By the way, Shropshire is your county, is it not?
Jack. Eh? Shropshire? Yes, of course. Hallo! Why all these cups? Why cucumber sandwiches? Why such reckless extravagance in one so young? Who is coming to tea?
Algernon. Oh! merely Aunt Augusta and Gwendolen.
Jack. How perfectly delightful!
Algernon. Yes, that is all very well; but I am afraid Aunt Augusta won’t quite approve of your being here.
Jack. May I ask why?
Algernon. My dear fellow, the way you flirt with Gwendolen is perfectly disgraceful. It is almost as bad as the way Gwendolen flirts with you.
Jack. I am in love with Gwendolen. I have come up to town expressly to propose to her.
Algernon. I thought you had come up for pleasure?… I call that business.
Jack. How utterly unromantic you are!
Algernon. I really don’t see anything romantic in proposing. It is very romantic to be in love. But there is nothing romantic about a definite proposal. Why, one may be accepted. One usually is, I believe. Then the excitement is all over. The very essence of romance is uncertainty. If ever I get married, I’ll certainly try to forget the fact.
Jack. I have no doubt about that, dear Algy. The Divorce Court was specially invented for people whose memories are so curiously constituted.
Algernon. Oh! there is no use speculating on that subject. Divorces are made in Heaven—[Jack puts out his hand to take a sandwich. Algernon at once interferes.] Please don’t touch the cucumber sandwiches. They are ordered specially for Aunt Augusta. [Takes one and eats it.]
Jack. Well, you have been eating them all the time.
Algernon. That is quite a different matter. She is my aunt. [Takes plate from below.] Have some bread and butter. The bread and butter is for Gwendolen. Gwendolen is devoted to bread and butter.
Jack. [Advancing to table and helping himself.] And very good bread and butter it is too.
Algernon. Well, my dear fellow, you need not eat as if you were going to eat it all. You behave as if you were married to her already. You are not married to her already, and I don’t think you ever will be.
Jack. Why on earth do you say that?
Algernon. Well, in the first place girls never marry the men they flirt with. Girls don’t think it right.
Jack. Oh, that is nonsense!
Algernon. It isn’t. It is a great truth. It accounts for the extraordinary number of bachelors that one sees all over the place. In the second place, I don’t give my consent.
Jack. Your consent!
Algernon. My dear fellow, Gwendolen is my first cousin. And before I allow you to marry her, you will have to clear up the whole question of Cecily. [Rings bell.]

Well, I just cut out the whole la de da de da about the cigarette case
Ahem! Continuing on then ...
Algernon. My dear fellow, it isn’t easy to be anything nowadays. There’s such a lot of beastly competition about. [The sound of an electric bell is heard.] Ah! that must be Aunt Augusta. Only relatives, or creditors, ever ring in that Wagnerian manner. Now, if I get her out of the way for ten minutes, so that you can have an opportunity for proposing to Gwendolen, may I dine with you to-night at Willis’s?
Jack. I suppose so, if you want to.
Algernon. Yes, but you must be serious about it. I hate people who are not serious about meals. It is so shallow of them.
[Enter Lane.]
Lady Bracknell and Miss Fairfax.
[Algernon goes forward to meet them. Enter Lady Bracknell and Gwendolen.]
Lady Bracknell. Good afternoon, dear Algernon, I hope you are behaving very well.
Algernon. I’m feeling very well, Aunt Augusta.
Lady Bracknell. That’s not quite the same thing. In fact the two things rarely go together. [Sees Jack and bows to him with icy coldness.]
Algernon. [To Gwendolen.] Dear me, you are smart!
Gwendolen. I am always smart! Am I not, Mr. Worthing?
Jack. You’re quite perfect, Miss Fairfax.
Gwendolen. Oh! I hope I am not that. It would leave no room for developments, and I intend to develop in many directions. [Gwendolen and Jack sit down together in the corner.]
Lady Bracknell. I’m sorry if we are a little late, Algernon, but I was obliged to call on dear Lady Harbury. I hadn’t been there since her poor husband’s death. I never saw a woman so altered; she looks quite twenty years younger. And now I’ll have a cup of tea, and one of those nice cucumber sandwiches you promised me.
Algernon. Certainly, Aunt Augusta. [Goes over to tea-table.]
Lady Bracknell. Won’t you come and sit here, Gwendolen?
Gwendolen. Thanks, mamma, I’m quite comfortable where I am.
Algernon. [Picking up empty plate in horror.] Good heavens! Lane! Why are there no cucumber sandwiches? I ordered them specially.
Lane. [Gravely.] There were no cucumbers in the market this morning, sir. I went down twice.
Algernon. No cucumbers!
Lane. No, sir. Not even for ready money.
Algernon. That will do, Lane, thank you.
Lane. Thank you, sir. [Goes out.]
Algernon. I am greatly distressed, Aunt Augusta, about there being no cucumbers, not even for ready money.
Lady Bracknell. It really makes no matter, Algernon. I had some crumpets with Lady Harbury ...


A little over a decade ago, I had immense fun playing Gwendolen for our small town players guild production. Now, how lucky is that? 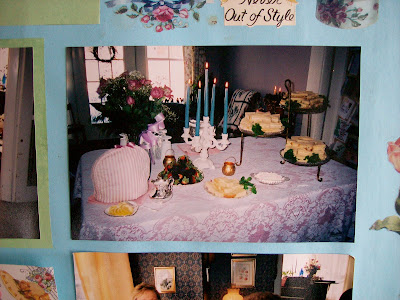 By the way, I haven't had a cucumber sandwich in an age. I can't wait!
Love,
Katy Noelle
The opening photo is from The Recipe Mogul and comes with some lovely looking recipes for tea sandwiches. I can't wait to try the cream cheese and pepper jelly one (although, I'm not sure about the Romaine lettuce on that!)
Labels: tea time Posted by Katy Noelle at 5:30 PM

New comments are not allowed.